If PurpleSorcerer.com is down, you're not out of luck! 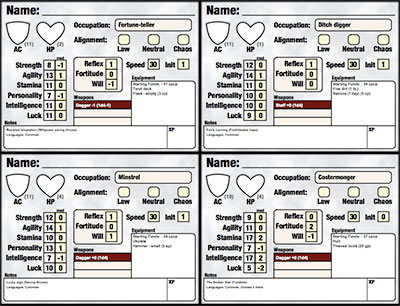 Oh no! You need to spit out a stack of characters for GaryCon, and the Purple Sorcerer server is experiencing one of its (extremly, extremly rare) bouts of non-responsiveness.... what are you to do? Well things aren't as bad as they seem, there are actually three Purple Sorcerer servers, 'serving' different purposes:

Luckily, the data and testing servers generally mirror the content on the main server. So if anything was to take the main server offline, the generators will most likely be working fine on the two backup servers. Of course, since you won't be able to access this page if the main server is down, if you're a power user that absolutely relies on the tools (or you have a huge con coming up!), please bookmark or memorize these links for future reference in an emergency:

Should I use these all the time to 'spread the load'?

No, I don't advise using these servers regularly: the main server has plenty of horse-power available to handle our usual traffic, and these two servers aren't guaranteed to have the absolute latest version of the generators running on them. There's also a slight chance that the testing server will be a state of 'not entirely working right' while I'm working out some troubling issue with a new tool or feature. But in a pinch, they are far better than nothing!

All three servers exist at different data centers spread around the U.S., so if all are down at the same time, we likely have far more troubling things to worry about than generating characters! Keep rolling my friends.